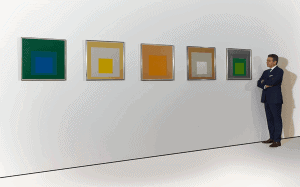 Homage to the Square, ©Josef Albers

The Wall Street Journal wrote an extensive piece today, September 8th 2017, on the phenomenon in the recognition and reputation – and, needless to say, market prices – of Josef and Anni Albers. According to David Leiber, prices for certain Homage paintings have doubled in the past five years and tripled in the past 10; the gallery has sold them at prices ranging from $300,000 to over $2 million. [1] In addition, Albers’s index in Artprice has increased + 1004% since 2000.
Since the announcement at the end of 2015 that the estate of Josef Albers would be represented by David Zwirner Gallery, the German artist has been the highlight of the art market. In the last auction season Albers became the unexpected focus of market attention within each sale. Until then, the highest price for a small, 16-inch-square Albers had been around $400,000, but when Christie’s in London auctioned off the collection of the Modern-art dealer Leslie Waddington, the first of three small paintings by Albers tripled estimates, selling for $848,000. This outcome was also result of Albers’s exhibition at the MoMA in New York titled “One and One Is Four: The Bauhaus Photocollages of Josef Albers”. After the highly positive review in the New York Times, the collectors began to turn their heads to this Bauhaus teacher.  “The show is more than just an advertisement. It’s a genuine, if highly selective and jumpy, traversal of a passionately sustained career.”[2] 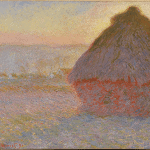 That $450 Million Leonardo? The Epic Triumph Of Branding & Desire Over Connoisseurship & RealityOPINION & REVIEWS